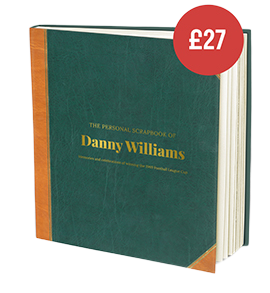 Personalise your copy of Danny Williams’ scrapbook which celebrates Swindon Town’s epic League Cup victory over Arsenal at Wembley in 1969. Danny achieved the unachievable with Swindon Town.
Forever remembered, forever missed.
In two four-year spells at the County Ground he presided
over almost 450 games, leading the club to a ‘double’
in 1969 – lifting the League Cup at Wembley and promotion from the third tier.
Danny convinced his troops that they could beat anyone
– and that was proved time and time again during the
League Cup run when Town saw off higher League opposition five times to lift the trophy. After reaching
Wembley just before Christmas he had told them to
‘forget about the Final and concentrate on the League
games – they are much more important’.
After handing over to Bob Smith in 1978, Danny moved
‘upstairs’ to become general manager.

Danny Williams’ personal scrapbook chronicles Swindon Town’s courageous League Cup win over Arsenal at Wembley in 1969. This is the first time in 50 years that the priceless archive with over 100 pages, has been shared publicly and it is has memories that any Swindon Town fan would love to own.

This Hard back 250mm x 250mm celebration book can be personalised on Page 1 to make the perfect gift.

Your product has been added to the cart!